In his second edition of The Jefferson Lies, David Barton provides a lengthy critique of our work in Getting Jefferson Right: Fact Checking Claims about Our Third President. We intend to use that material in our own second edition which I hope to publish sometime in 2016. In response to Barton’s new edition, I am going […]

David Barton was on Calvary Chapel pastor Jack Hibbs’ show Real Life with Jack Hibbs last night. Part one is available on You Tube with apparently more to come. They didn’t get into much until near the end of this segment. At about 22 minutes into the video, Barton accuses others of using history to […]

This law (scroll to page 39) allowed the emancipation of slaves by an owner either at death through a will or while an owner was alive via a deed of manumission. Many slaves were freed by their owners as the result of this law. Legal adults of sound mind and body did not need support from […]

In his World rebuttal to us, David Barton claims that the case of James Armistead  Lafayette proves that we did not take into account slave laws other than the 1782 law allowing owners to emancipate their slaves. The situation of this slave who became a double agent during the Revolutionary War is an interesting story […]

UPDATE: David Barton made many of the same defenses in his World Magazine article dated January 22, 2013. Barton concluded: Simply put, Jefferson did not have the financial resources necessary to free his 260 slaves. In these three articles about Jefferson and slavery we anticipate and address the rebuttal Barton offered in his World article. Barton […]

UPDATE: David Barton made many of the same defenses in his World Magazine article dated January 22, 2013. Barton concluded: Simply put, Jefferson did not have the financial resources necessary to free his 260 slaves. In these three articles about Jefferson and slavery we anticipate and address the rebuttal Barton offered in his World article. Barton claims […]

By Michael Coulter & Warren Throckmorton UPDATE: David Barton made many of the same defenses in his World Magazine article dated January 22, 2013. Barton concluded: Simply put, Jefferson did not have the financial resources necessary to free his 260 slaves. In these three articles about Jefferson and slavery we anticipate and address the rebuttal Barton offered in […]

This week, Michael Coulter and I are going to present a series of reactions to an eight minute YouTube video of David Barton’s Capitol Tour. Sponsored by the Family Research Council, the video provides narration from Barton speaking in the Rotunda of the Capitol. First, I am going to revisit Barton’s fable about Jefferson and […]

Get the book David Barton doesn’t want you to see. Now get it cheaper. Until early next week, I am lowering the price of the Getting Jefferson Right in paperback to $9.95 (23% off) and the Kindle version to $3.99 (20% off). It will take awhile for the Kindle price to change on Amazon but you can get the […] 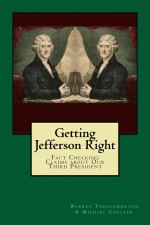