Getting Jefferson Right: Fact Checking Claims about Our Third President

Nearly two centuries after his death, Thomas Jefferson continues to be the subject of competing claims about his public policy and his private beliefs.

The authors examine the following questions and more.

-Was Jefferson unable to free his slaves under Virginia law?

-Did Jefferson sign his presidential documents, "In the year of our Lord Christ?"

-Did Jefferson and other Founders finance a Bible in 1798 to get the Word of God to America's Families?

-Did Jefferson edit the Gospels of the New Testament to remove sections he disagreed with?

-Did Jefferson found the University of Virginia to be the first trans-denominational Christian college?

The aim of the authors is to get Jefferson right.

NOW AVAILABLE: Getting Jefferson Right in paperback. Many have asked for it and so here it is in print. 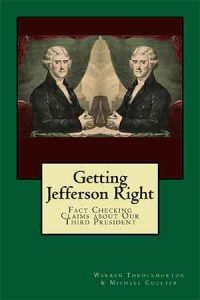 The eBook, Getting Jefferson Right: Fact Checking Claims about Our Third President is still available on Amazon.com and Barnes and Noble (only $4.99 both places).

Click the links to see the pages and purchase the book.

You can view the book on any wireless device and any computer. Check here to learn how you can read this book on any device you own (Amazon).